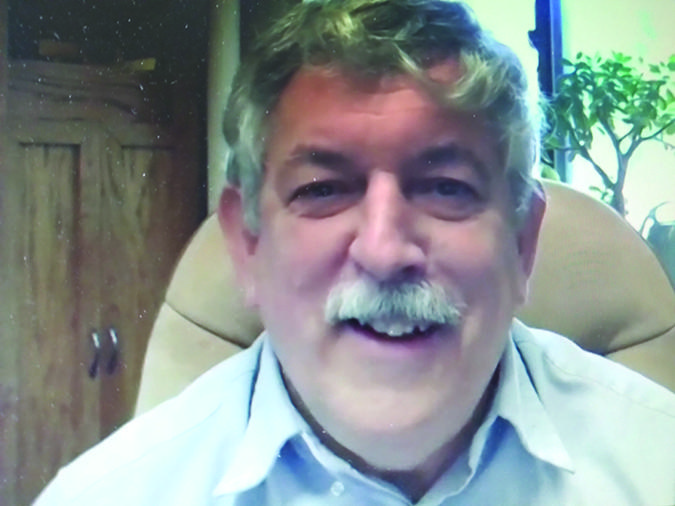 Dr. Marvin Pritts and his team at Cornell University studied strawberry flavor over the course of three seasons. On the same farms, when it was hot, sugar content was higher, he said. Acidity was low in 2018, higher in 2019 and highest in 2020. (Photo by Richard Skelly)

The weather plays more of a role in the taste of strawberries than most farmers realize, according to a new study from Cornell University.
Dr. Peter Nitzsche, Rutgers Cooperative Extension agriculture resource agent for Morris Country, moderated a talk and question-and-answer session with Dr. Marvin Pritts, Cornell horticulture professor.
Nitzsche pointed out a silver lining in the 2020 pandemic: He said he’s been able to attend more conferences and get more knowledge on fruit and vegetable growing techniques and cutting edge technologies than he would have in a “normal” year.
Time and budgetary constraints prevented Nitzsche and dozens of others involved in agricultural education in New Jersey from flying all over the United States to conference, but last year and into 2021, with so many conferences being held virtually, he’s been able to attend many more meetings, including a virtual conference last year with Pritts as a speaker.
In his opening remarks, Pritts was candid and said one of his graduate students at Cornell University did most of the work on studies affecting strawberry flavor.
“We’ve all had the experience,” Pritts said. “Sometimes the strawberry tastes good, sometimes it tastes bad. You go back to the grocery store a week or two later and sometimes they don’t taste as good.”
Some variations in taste are due to strawberry variety and some is due to time of harvest, he said, “and there’s speculation about other factors too, like organic matter and nutrients in the soil, and if you spray pesticides and the impact of the weather.
There are claims that organic strawberries just taste better, but there really isn’t any scientific evidence to support this.”
Pritts and his grad student team organized a study where they controlled everything, “and see which factors, if any, impact flavor.”
Components of flavor include sugar content balanced with the natural acid in the fruit and the volatiles that give it that strawberry flavor.
“If it’s too sweet and not enough acid, the strawberry tastes bland,” Pritts said. “If it’s too acid and not enough sugar, it tastes sour, so you want to have that balance just right, and we wanted to learn if the management practices we employed could affect strawberry quality with the same cultivar, the same soil type and the same location.”
He said what they found was it was not differences between soils on different farms that give strawberries their best flavor, it is variations in the weather.
Pritts and his team at Cornell studied flavor over the course of three seasons. On the same farms, when it was hot, sugar content was higher, he said. Acidity was low in 2018, higher in 2019 and highest in 2020.
“This suggests to us, it’s the weather that is controlling sugar content and acidity,” Pritts said.
On their plots, the air temperature between flowering and pink fruit was positively correlated with sugar content at harvest.
“We also found that the minimum air temperature during that period was negatively correlated with sugar content at harvest. As it got cooler and cooler at night, the berries got sweeter and sweeter,” he said, so when both things are happening at once, warm days and cool nights, sugar content increases.
“The difference between the day temperature and the coolest night temperature is highly correlated with sugar content in the fruit at harvest,” Pritts said. “We found that difference in temperature is also strongly correlated with acid content in the fruit.”
The research, Pritts said, suggests there’s not much of a payoff in terms of enhancing strawberry flavor by deviating from what you’re doing now. Pritts added his team did find that higher nitrogen in the soils results in higher yields, but the flavor is always the same.
“If organic management does impact flavor, how much time do you need to have under organic management before these flavor differences come out? We did for two to three years. We didn’t see differences in that period of time, but it doesn’t mean there wouldn’t be there if we grew them organically for five years or more.”
Summing up, Pritts said “warm days and cool nights seems to be the biggest driver in flavor. Farm location plays a lesser role and how you grow them plays even less of a role.”
Pritts closed with a quote from poet-philosopher Marcel Proust, who said: ‘A change in the weather is sufficient to recreate the world and ourselves,’ and I’ll add, and enhance the sweetness of a strawberry.”