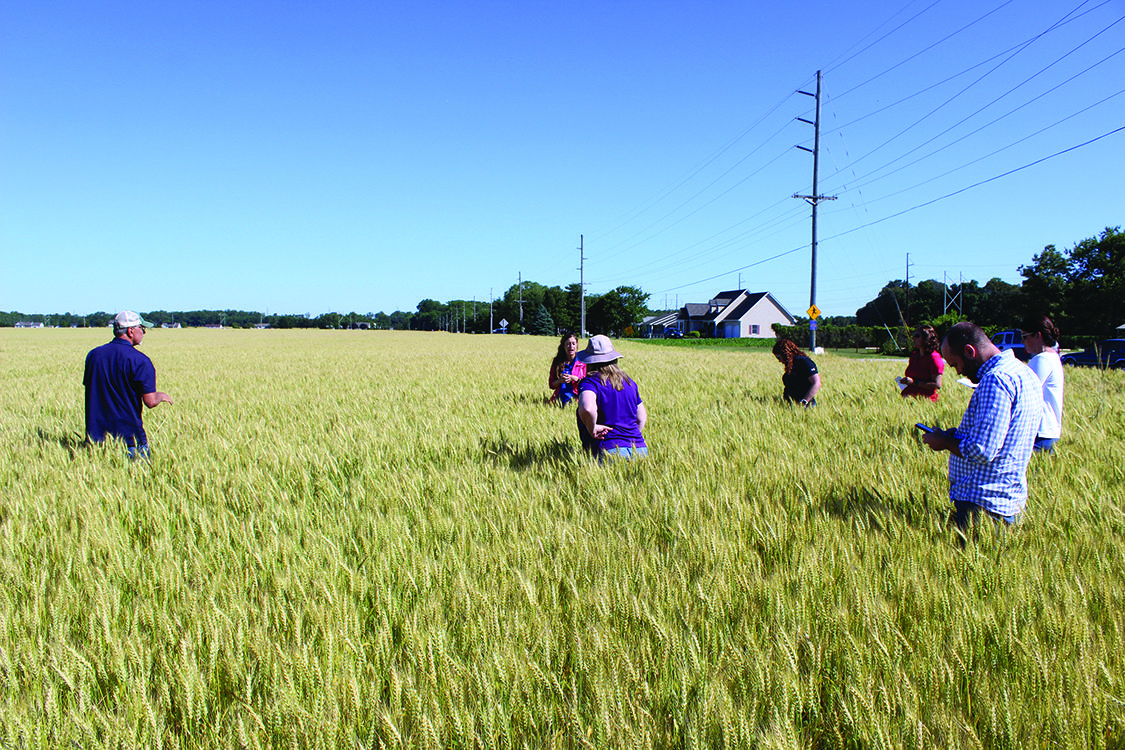 Participants in this year’s Delmarva Wheat Tour discussed many issues that affect crop quality and baking characteristics while examining fields throughout Delaware and Maryland’s Eastern Shore. (Photos by Sean Clougherty)

Despite some sporadic challenges in weather, wheat buyers and agronomists are anticipating a strong crop according to reports from recent field tours throughout the Mid-Atlantic.
Heading into harvest, yield estimates from the tours frequently reached 90 to 100 bushels per acre or better, a welcome sign for growers facing volatile markets and steep input costs.
“With robust yields and many more acres this year, we anticipate a huge crop regionally.  Elevators are preparing bin space to accommodate the high volume and will spend the rest of the summer moving it to the flour mills in Pennsylvania,” said Mark Sultenfuss, an agronomist at Nagel Farm Service and an organizer of the Delmarva Wheat Tour held June 6.
Reports from multiple tours in the Mid-Atlantic states, shared at the Southern Pennsylvania Agricultural Business Association dinner on June 7, dovetail with the June 5 USDA Crop Progress and Condition report that showed winter wheat rated Good or Excellent was 92 percent in Maryland, 66 percent in Delaware and 66 percent in Virginia.
Fields with lower yield estimates were often due to lower population, Sultenfuss said.
The Delmarva tour visited eight fields in six Maryland and Delaware counties.
Incidence of Fusarium head blight were found in many fields but generally at low levels. Occasional signs of frost damage from a late April cold spell were consistent in some fields with more severe damage seen in other fields.
After having great weather in the fall for planting, stand establishment and tillering, the crop crop was looking great going into green-up, said Alyssa Koehler, University of Delaware Extension plant pathologist. A period of wet weather when a lot of acres were at the flowering stage triggered Fusarium head blight, or head scab, in many fields — “more than I was hoping to see,” Koehler said — but not to levels growers have had to contend with in the past.
“Last year was really kind of an anomaly with really hardly any disease around but it’s not going to be our worst year, either,” Koehler said. “Unfortunately, we usually are almost always high risk.”
Though crop quality looked good through the region, Sultenfuss said favorable weather is still important as the crop continues to mature.
“The risk with wheat is that you do everything right and get right to the finish line and end up with three days of rain and you start the harvest with a reduced test weight and quality,” he said.
Delmarva tour leaders said the strong crop also speaks to growers’ management of the crop but managing previous corn residue, selecting scab-resistant wheat varieties and planning to apply fungicides at key growth stages.
Fungicide is about 50-60 percent effective in keeping scab away, added Nicole Fiorellino, University of Maryland Extension agronomist, so using them in concert with other management practices can put up an even stronger defense.
“If you’re going to grow wheat, you’ve got to be all in,” Sultenfuss said.
Timely irrigation has become part of wheat management for Seaford, Del., farmer R.C. Willin. Speaking to tourgoers at his farm, he said they have seen benefit in irrigating the crop before the flowering stage to “pre-load” it with moisture and if weather stays dry through flowering, he’ll irrigate again for grain fill and it also lowers field temperature and reduces crop stress, he said.
“We are confident that it pays to irrigate wheat,” Willin said. “It’s just the timing has to be right.”
Willin said “it’s been a more challenging year than we anticipated” for wheat, estimating frost damage could cost him about 10 percent in yield and disease loss could be another 10-15 percent but with those small cuts, it’s still shaping up to be one of his best wheat crops.
Organizers said the tours help wheat buyers and brokers get a good idea of what kind of crop will be coming at harvest.
John Sutton, owner of Sutton Trading Company in Ambler, Pa., who’s been helping to organize the annual Delmarva tour since it started more than a decade ago, said getting people together from different parts of the wheat industry strengthens its network along with giving buyers an idea of what kind of crop will be coming to them.
“It gets better every year because you get more participation from people and we have a better understanding of what to look for,” Sutton said.
Aaron Amundson, associate trader for Ardent Mills said he views the tour as “a kind of inside information” on what’s happening at the field level, as he prepares for purchasing winter wheat.
“For me it’s just getting a good jump start on the crop that’s coming in,” Amundson said. “As a flour miller, I have direct insight into what people who handle the crop are seeing.”