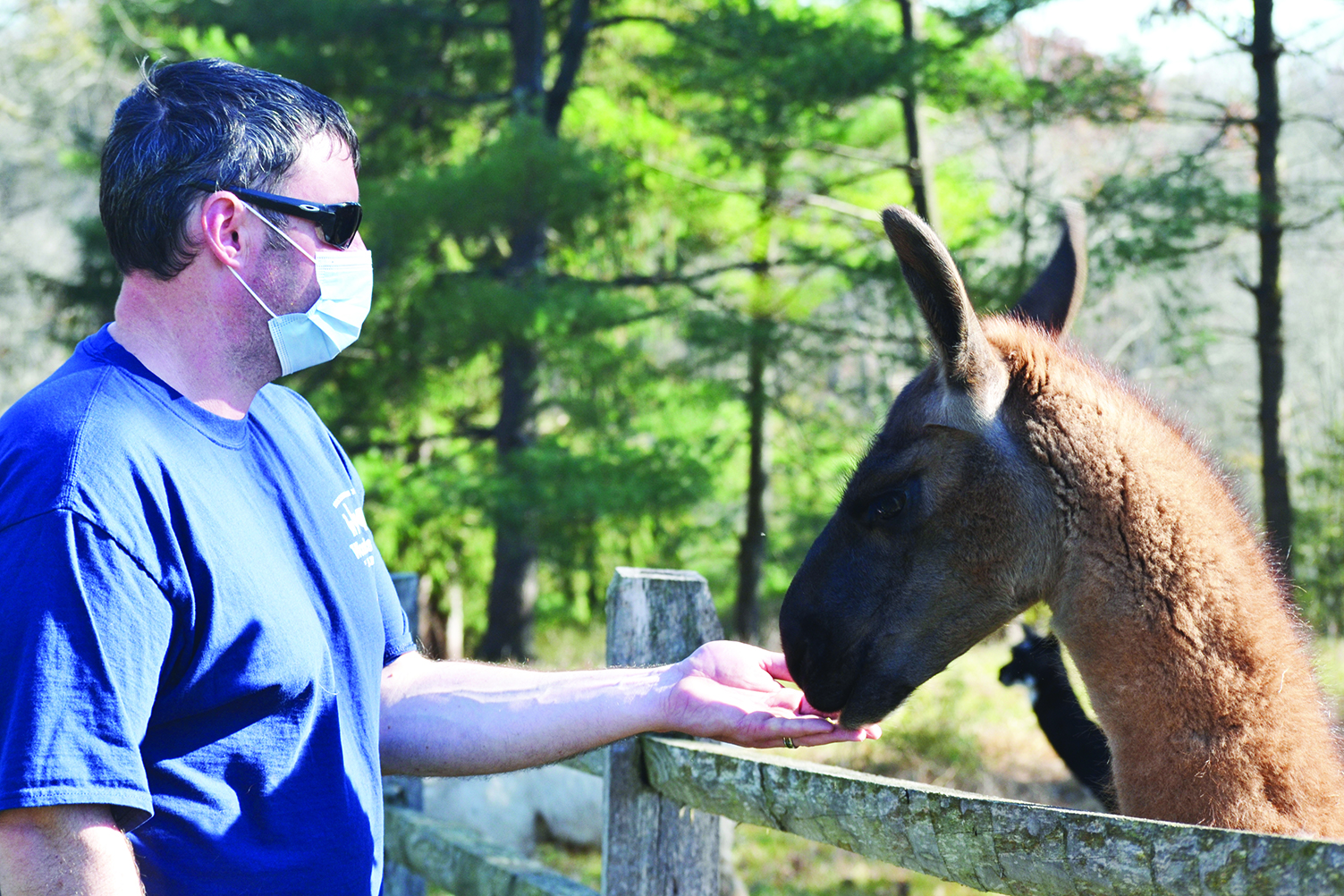 Brent Walker greets Larry the Llama, whose oversized personality makes him a favorite among visitors to Woods Edge Farm. (Photo by Jane Primerano)

STOCKTON — Woods Edge Farm became an informal destination for the Friday of Teachers’ Convention weekend.
Three moms with small children set up a blanket near the female llamas to share Halloween candy among the kids and handfuls of grass among the ruminants.
Other customers were visiting the farm store, open for the first time this year on Friday, Nov. 6.
Brent Walker, who runs Woods Edge, opens the store as the farmers’ market season ends.
The operation will remain open through January.
He built the rustic building with a wide front porch 14 years ago to retail fiber items from the 120 llamas and alpacas on the farm.
The store hours are 10 a.m. to 4 p.m. on Fridays, Saturdays and Sundays.
The farm has been in the Walker family since 1980 when Brent’s parents moved it from Princeton where they started to farm in 1976.
The Walkers started raising sheep for food and wool and brought in a llama as a guard animal.
Walker’s mother, Linda Berry Walker, was attracted to the fiber.
Llamas started becoming popular in the 1980s but the Walkers brought the first alpacas to the state.
The animals were flown to Key West from South America on a C130 cargo plane, Walker remembered.
They were quarantined there and the Walkers picked them up at the Navy base on the island.
Since 1999 when the quarantine station closed, farmers can no longer import alpacas so all the stock today is North American and their fiber is just as good as from South America, Walker said.
He used to show his alpacas all over the Lower 48 states but now that he has so much product to sell he has stopped showing.
He sells at a number of farmers’ markets around the state, including Collingswood, Summit and Ramsay. Some animals accompany him to the markets.
He rotates them out because they easily get used to being fed and can get a little obnoxious with people.
The llamas and alpacas are sheared every spring by a professional from Pennsylvania, Walker said.
It takes two full days to shear them all.
Since his mother’s death, Walker has run the farm with his wife, Amy Serridge, who gave up her job to become a full-time farmer.
“It’s all we do,” Walker said.
The store is full of products from llama-fiber rugs, made from the long neck curls they grow for winter, to novelty hats for children. ‘
The fiber is soft and warm and makes great socks, Walker said. He has knitters in North Carolina to make the product.
Among the specialty items are alpaca dryer balls which, Walker said are more effective than dryer sheets at picking up cat and dog hair and don’t include any of the toxic chemicals.
The Walkers keep bees and sell honey and beeswax candles as well as other products.
Woods Edge is also known for its yak meat, but Walker said he is having trouble getting the animals slaughtered because of the pandemic.