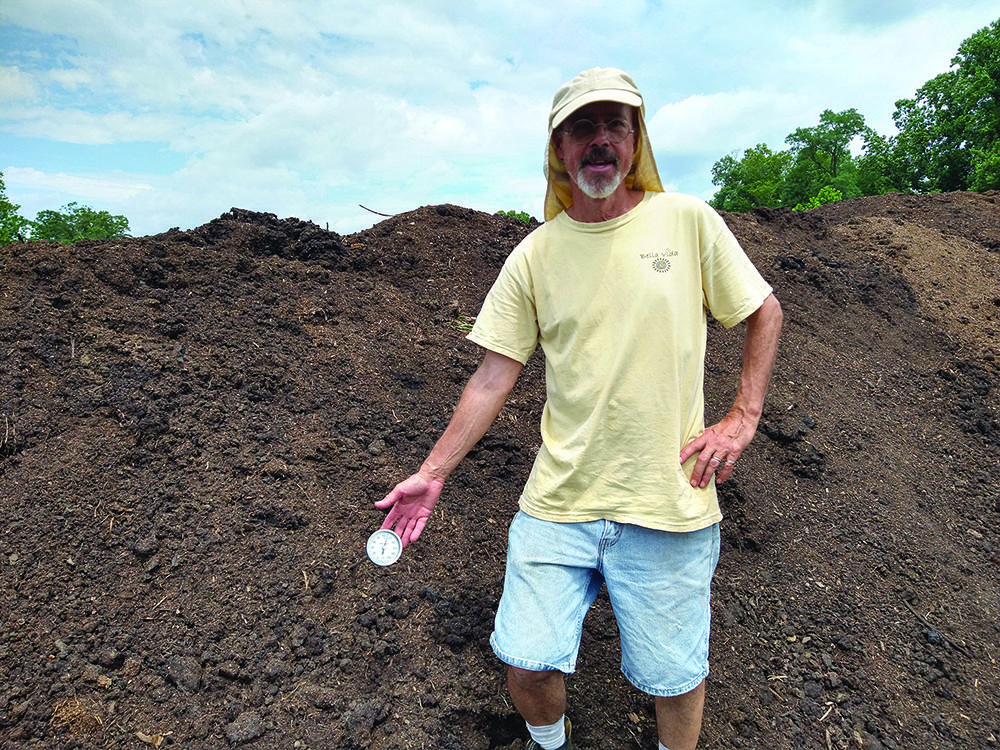 Chesterfield farmer Jim Kinsel stands at one of his farm’s compost piles. In late June, he led a workshop for about 30 people on safe and efficient composting of manure, wood chips and tree leaves via the Aerated Static Pile process. (Photo by Richard Skelly)

CHESTERFIELD — Jim Kinsel has some definite views about composting and how smaller farmers could profit from the sale of compost in New Jersey.
The USDA Sustainable Agriculture and Research Education project in 2021 awarded Kinsel and his wife Sherry Dudas a grant to establish a demonstration pilot for safe and efficient composting of manure, wood chips and tree leaves via the Aerated Static Pile process.
With grant funding left over, they proposed to have an educational workshop for people interested in composting. The workshop held on June 28 was well-attended but Kinsel said state regulations are keeping more people from getting involved.
Their sold-out composting seminar this summer drew about 30 patrons and included a light lunch and a tour of Kinsel and Dudas’ composting piles and greenhouse heating system at their acreage off Chesterfield Road.
Kinsel uses inexpensive aerators in his various piles of compost and has made use of a lot of free horse manure from area horse farms.
“Currently, so much of it is going into the landfill,” he said of the manure, “and that’s such a waste, especially with the high prices of fertilizer.”
The main takeaway from his seminar, he hopes, “was that it really doesn’t take that much, you don’t really need any fancy technology to be able to compost horse manure.
“It has to be a large enough pile and if you have a loader with a lot of people for scooping it out you can use the front-end loader for turning your piles, which helps with composting to move the process along. Within a year, you can have really nice compost that you can apply to your fields.”
Kinsel said one reason composting isn’t getting more attention from farms is current regulations in New Jersey prevent farmers from selling organic compost in various stages of readiness. That’s unfortunate for smaller farmers, Kinsel said, because that income in some years can make the difference between profitability and just breaking even.
“When an agricultural waste is turned into an agricultural resource, we should be able to sell it. I’m thinking the reason why this is not the case as so often happens when they write legislation in Trenton, if they want to be a little more lenient for a certain group of businesses, the other groups get all bent out of shape,” he said.
“If you have a commercial composting facility, you have to go through all the rigormoral, all the red tape, and comply with all the regulations. How can these farmers do it all for nothing?”
Kinsel said limiting how much a farmer could produce and what materials can be used may be a way to compromise.
“You could even limit sales to other farmers,” he said.
At Kinsel’s other plot of land in Pennington, they compost leaves, but at the newly renamed Chesterfield Organic Farm and Orchards, he and his crew use horse manure and sawdust.
“I did a calculation here based on finished compost nutrient testing and found out that in 10 tons of wet finished compost right off the farm you’re getting about 100 pounds of nitrogen. And you can keep doing this every year,” he said.
In this era of higher fertilizer and diesel fuel prices, Kinsel said he sees a ray of hope for changes in laws that will allow farmers to sell compost to backyard gardeners and other small or large farms, whether conventional or organic.
After all, Kinsel said, “you don’t need to be an organic farmer to care about your soil quality.”