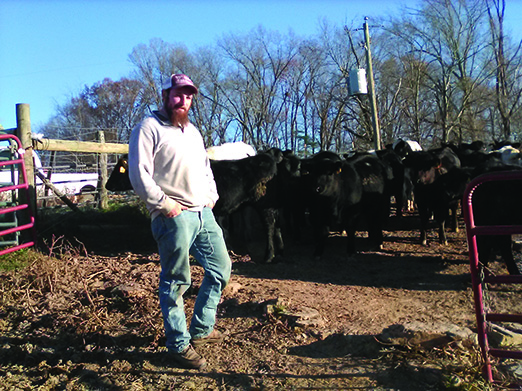 Troy Whittier, with help from family, cleared the land to establish good pastures for his Whittier Cattle herd. (Photo by Jane W. Graham)

PULASKI, Va. — “Starting from scratch” is the way Troy Whittier, 30, described his work creating a cow/calf operation on a farm that was covered with a mix of broom sage and briars when he acquired it.
Now he is running about 100 cows and recently started weaning a set of steers for the next Virginia Quality Assurance Sale planned for January in Dublin.
He and his dad, Dee Whittier, a retired Virginia Tech Extension veterinarian, are partners in the farm business. Troy said Dr. Whittier had about 15 acres in Blacksburg when he was at Virginia Tech and raised a few cows there. He recently purchased a farm about two miles from Troy’s home.
Troy and his wife Brooklyn have three young daughters. They live in a house on the farm that dates to World War II. Locals know it as a “Government House”. During the war, the government built the small houses on farms across the New River Valley to house the influx of workers who arrived to work in what is now the Radford Army Ammunition Plant. The houses went to the landowners at the end of the war.
Troy and his family were house sitting for his parents who were on a mission trip to Guatemala at the time he bought the 237-acre farm in the Shilo community. He said that this gave them time to fix up the house and do some work on the farm.
Troy signed on to the USDA Natural Resources Conservation Service’s Environmental Quality Incentives Program early in the development of his farm and received assistance for fencing, and a water system. These are on-going projects.
The Whittiers said they have built almost five miles of fence since Troy acquired his land. He uses intensive strip grazing, turning the cows onto new grass every day. He plans to have nine different pastures when the fencing is complete.
The Whittiers have cleared the land and establish good pastures. They have fertilized and limed in accordance with soils testing and planted clover to help feed the soil.
The have chose not to make hay but to buy what they need which would help them add organic matter to the soil without taking nutrients away. He said he’s already seeing improvements in the soils.
The cost of buying hay-making equipment was another factor in deciding to buy the hay they need.
The farm’s water system remains a work in progress. They have drilled a well, laid 10,000 feet of pipe and a new concrete pad has been poured for a waterer. When the project is finished there will be 11 waterers throughout the farm, Troy said.
Troy said he sends his best steer calves to the Virginia Tech Glade Spring Agriculture Research and Extension Center where they are used in research. These are then sold in a Virginia Quality Assurance sale in Abingdon. He sells his other calves in the VQA sale at nearby Dublin.
Along with the farm, Troy said he is putting his animal science degree from Virginia Tech to work in a new job as the manager of the Land Lab at Giles County High School in Pearisburg. There he is helping educate students in that rural county in sound farming principles on the school system’s farm.