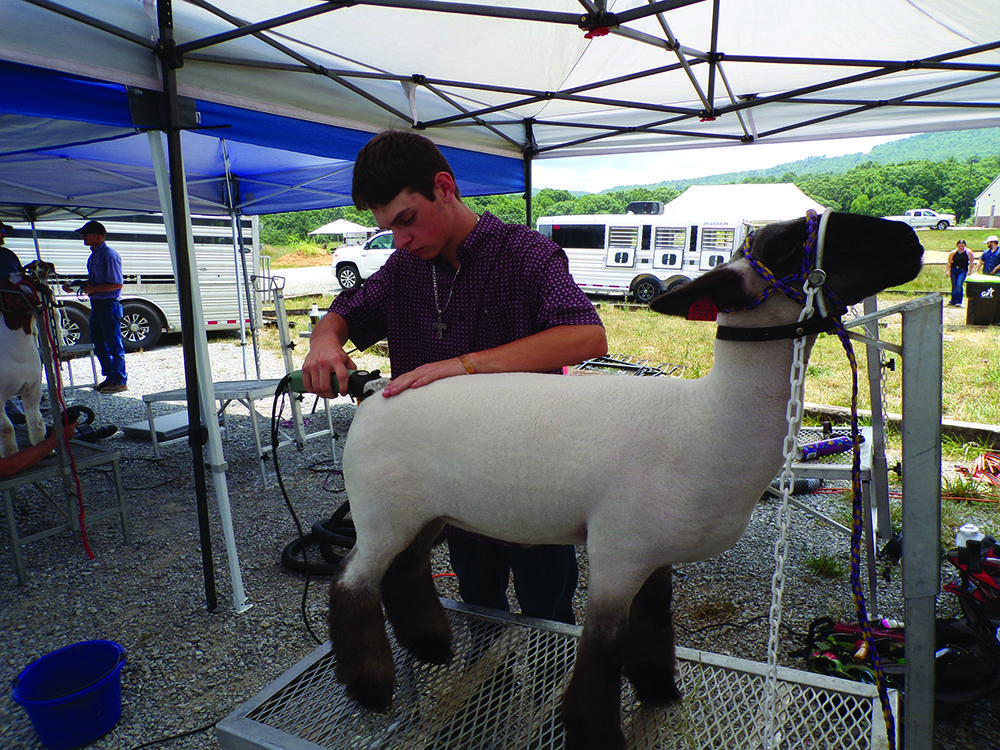 Riley Shirley, of Berryville, Va., was serious about putting the final touches on this sheep. He had dashed from the goat show ring to care for the sheep after delivering the goat to his father’s care. (Photo by Jane W. Graham)

WYTHEVILLE, Va. — The 2022 Virginia Youth Lamb and Goat Symposium was an opportunity to learn about livestock and have fun while doing it.

The event held at the Appalachian Regional Expo Center was the second in a series of nine sponsored across the state by the Virginia Showmasters that will culminate at the Virginia State Fair.

A group of children from Chatham, Va. waiting outside the show ring for their turn talked about their Boer goats and the reasons they had chosen them. Preston Wydner was showing both his goat and those of his younger sisters Abi and Ginny. He was joined by a family friend, London Van der Hyde.

The youths had different reasons: Preston said they were cute, loveable. Ginny said that you can teach them. London said they were fluffy and obedient. This group was accompanied by parents Amanda and Freddie Wydner.

“We’re having a great time,” the parents said. “It’s a great opportunity.”

Outside the building, Steve Shirley from Berryville, Va., talked while grooming a sheep for the showring while his son, Riley was showing a goat in the inside arena.

Steve said his family would be going from Berryville in Clarke County across the state to Washington County for shows. Those participating in the showmanship competitions along the way earn points that will be tallied at the state fair. The organization uses the points for granting scholarships and prizes, he added.

“It’s important for the kids,” said Joi Saville, a Christiansburg mother of three who were participating in the symposium. “It teaches them responsibility and a work ethic.”

The Saville family had brought seven lambs and two goats to the symposium held at the new APEX complex on a sweltering Wythe County hillside.

They were part of a circle of tents and livestock trailers ringed the parking lot as competitors and their families worked to groom and keep their animals and themselves cool.

Steve Shirley said the Virginia Showmasters Circuit provides youth the opportunity to develop their showmanship and animal management skills. These will be tested in the coming weeks at other events.The circuit continues with shows across the state.