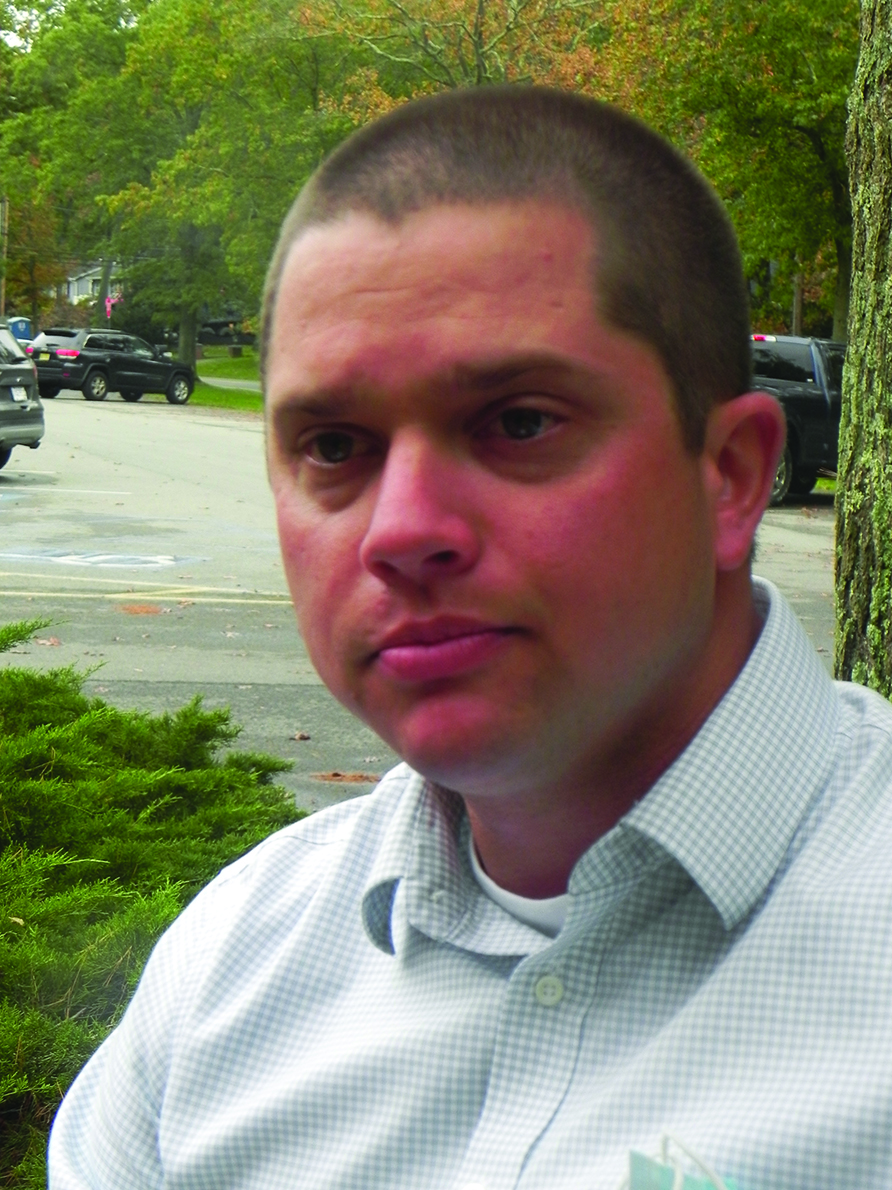 Dr. Doug Zemeckis assists commercial and marine fisheries that dot the shoreline from Sandy Hook to Cape May and gives support to new oyster farmers in the Delaware Bay. (Photo by Richard Skelly)

TOMS RIVER — As one of a few aquaculture specialists in the state, Dr. Doug Zemeckis’ work spans across Ocean, Monmouth, Atlantic, Cape May and Cumberland counties.
The Edison native had the benefit of a family with a Shore bungalow in Normandy Beach, Brick Township, so he grew up on the Ocean County shore during summers.
He credits his father for sparking his early interest in deep sea and surf fishing and he recalls his freshman year at Rutgers College, he was able to take courses in Oceanography, which helped solidify his career path.
Zemeckis replaced Gef Flimlin, who retired to Belfast, Maine in 2017 after 38 years as a Rutgers marine and aquaculture Extension agent, based at Rutgers Cooperative Extension in Ocean County.
Zemeckis assists commercial and marine fisheries that dot the shoreline from Sandy Hook to Cape May and occasionally makes trips to the Delaware Bay as well, where there is a burgeoning oyster farming industry.
“I oversee things like water quality, summer flounder, tuna, hard shell clams and oysters,” Zemeckis said from outside the RCE office.
He added his job “is really broad and overlaps with DEP a bit, and I also collaborate with the New Jersey Department of Ag, Fish and Wildlife, and other agencies.”
While there are currently no scallop farmers in New Jersey, it’s no secret to Garden State foodies that the oyster industry here has been growing.
Scallop boats out of places like Viking Village in Barnegat and marinas in Cape May County actively dredge for scallops found 15 miles and more offshore.
Scallops have been a lucrative industry and sought-after seafood for at least the last two decades.
Wild-caught sea scallops are a $600 million industry here in the Garden State, he noted.
“While we don’t have actual farming of sea scallops right now in New Jersey, they are doing some exciting experiments with it in Maine,” Zemeckis said, so it’s possible within a decade, farm-raised sea scallops will help lower prices on this sought-after delicacy.
What’s a typical work week like for Dr. Zemeckis?
“Prior to COVID coming in, I spent a fair amount of time going to Department of Agriculture meetings, Marine Fisheries’ Council meetings in the evenings and doing a lot of field research as well.”
He also speaks to various fishing clubs up and down the Jersey coast.
Research projects he has been involved with include catch and release survival rates for various species of fish, including black sea bass, cod and haddock.
One specific project looked closely at black sea bass survival rates.
Next year or the year after, COVID permitting, “we want to study summer flounder survival rates,” Zemeckis said. “Another study we did recently looked at artificial reefs and how lobster, sea bass and blackfish benefit from these reefs.”
“In general, shellfish aquaculture has seen a lot of growth,” Zemeckis said. He was quick to credit Dr. Lisa Calvo and the research projects she directs at Rutgers’ Haskin Shellfish Lab in Port Norris on the Delaware Bay.
Young and second-career oyster farmers have been popping up all over the Delaware Bay and the trend not only improves the health of the water in the bay and its tributaries, it also helps rebuild New Jersey’s once-glorious Eastern oyster industry.
Oyster and hard clam farmers obtain shellfish farming leases from the State of New Jersey, and many farm operations are underway on the Delaware Bay and the Atlantic coast.
Just as vegetable, fruit and livestock farmers have a variety of pests to guard against, so do hard clam and oyster farmers.
“You talk about wildlife impacts on terrestrial agriculture, you have deer, birds, foxes, coyotes, all kinds of insect pests,” Zemeckis said.
In aquaculture, farmers deal with cow-nosed rays, sea birds and various types of sponges that threaten their crop.
Rutgers’ Cooperative Extension in Ocean County has also partnered with Re-Clam the Bay, a non-profit shellfish restoration program that has been making steady progress in cleaning up the Barnegat Bay estuary, “and it all complements other restoration work that is being done.”
Zemeckis and others at the Ocean County office teach a Coastal Stewardship Course for volunteers, just as county Extension offices have Master Gardener programs for vegetable and fruit growing enthusiasts.
“In our Coastal Stewardship course, we teach people about estuarial ecology, shellfish biology and restoration so they’re prepared to get involved with initiatives involving shellfish and other species to improve the quality of our coastal marine ecosystems,” Zemeckis said.
All of which points to more surf clams, hard clams, oysters and other shellfish for everyone to enjoy.
One type of seafood not being farmed in New Jersey’s coastal waters are shrimp. Shrimp need warmer waters, Zemeckis said, so they tend not to grow very large here.
“However, there is this capacity here for aquaculture innovation,” he said, “so someday soon, maybe it can be done in New Jersey.”